St. Barnabas Church, Holy Trinity Parish is located on a hill in Howard County, Maryland overlooking the South Branch of the Patapsco River and the quiet and historic town of Sykesville.

Holy Trinity Parish originated on March 8, 1771 when John Welsh entered into a bond of two hundred pounds, English Sterling, to convey to Abel Brown, Robert Tivis, Edward Dorsey and John Elder two acres of land in the town of Eldersburg to build a “Chapel of Ease.”

A small stone church was built on land that now sits right off of Route 26 and flourished until the time of the American Revolution. The “mother” Church of England no longer had authority to collect taxes to support Holy Trinity and the church began to fall into decline.

In 1834 the large and influential Warfield family moved into the Sykesville area. The Warfield’s are known for their contributions to the American War for Independence, the creation of Carroll County, and for their strong support for the Episcopal Church. In 1843, George Warfield took steps to refurbish Holy Trinity Chapel and petitioned the Diocesan Convention to grant them permission to organize an independent parish. Bishop Whittington consecrated Holy Trinity Church on October 31, 1843.

The area now known as Sykesville began its commercial growth with the arrival of James Sykes in 1825. Sykes bought 1,000 acres of land from George Patterson, including a saw mill and a gristmill that were located on the Howard County side of the Patapsco River. Sykes rebuilt these structures as well as a new 47 room hotel to take care of railroad personnel and tourists from Baltimore. It was during this time that the Baltimore and Ohio Railroad reached the Sykesville area. 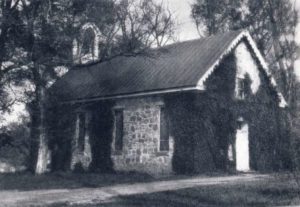 In 1844, Susanna Warfield petitioned for a new Chapel of Ease in Sykesville. The trip from Sykesville to Eldersburg (to attend Holy Trinity), about three miles, was considered too inconvenient and difficult for the immigrant families and less privileged who worked in the mills. In 1845 James Sykes enlarged his mill into the Howard Cotton Factory and these workers and their families also needed a place to worship.

On June 11, 1850, on the Feast of St. Barnabas, the corner stone for our present St. Barnabas chapel was laid. The chapel was completed and consecrated on December 11, 1851.

In late June, 1863, the Confederate Cavalry, under the command of J.E.B. Stuart passed by St. Barnabas to capture Sykesville. They cut telegraph wires, tore up the tracks of the B&O railroad and burned the bridge over the Patapsco River which separates St. Barnabas from the town. On June 29th they rode north to Gettysburg.

Holy Trinity Church at Eldersburg continued to flourish until about 1870. By that time, St. Barnabas Chapel had grown into prominence and Holy Trinity began to decline. In the early 1900s the Holy Trinity Church fell into disrepair and was closed in 1924. During WWII it was demolished, leaving St. Barnabas the only Episcopal Church in the Holy Trinity Parish. The graveyard at Holy Trinity still exists and members of the Parish led by our former Rector, Jim Purman, lovingly care for this Holy ground. St. Barnabas has been in continuous use since 1850, serving South Carroll and Howard Counties. In 1981, under the guidance of the vestry and former rector Joe Burroughs, the church was restored, preserving the original architecture. The stonework, pews, altar and windows are all original, as well as most of the woodwork and hardware.

Special thanks to http://www.sykesville.net/ and the Sykesville Gatehouse Museum of History.